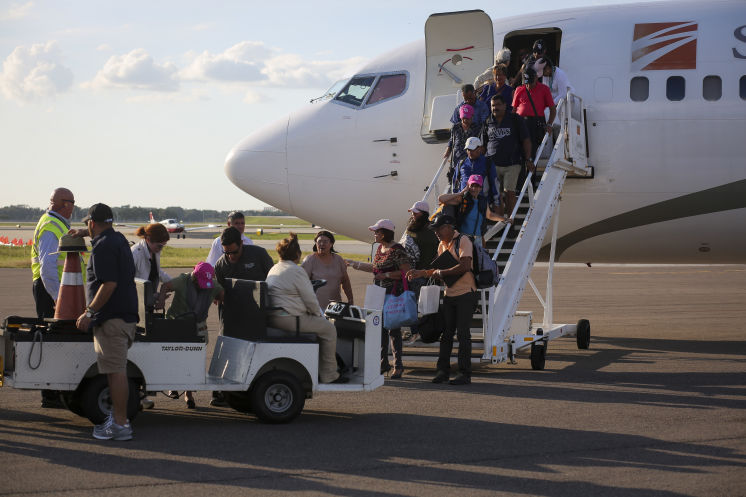 PONCE, Puerto Rico —While Hurricane Maria’s 155 mph winds were rushing over Dr. Jaime Matta’s coffee farm in the mountains Sept. 20, his thoughts raced to the precious vials of cancerous tissue in his lab at Ponce Health Sciences University.

A decade’s worth of study hinged on the precisely negative 150 degree Celsius coolers maintaining their temperature. Once the storm passed, there was no way he would trust the generators while the island dealt with a catastrophic recovery and weeks without power.

“I was praying for the tissues,” Matta said. “They are irreplaceable.”

He and two dozen other researchers have spent years studying these samples from cancer patients, building a one-of-a-kind bank to analyze health disparities in Hispanic patients, in partnership with scientists at Moffitt Cancer Center in Tampa.

As soon as Maria passed, Matta was determined to evacuate the 3,000 samples to the Moffitt sister lab for safe keeping.

But first, he needed to somehow find a jet to get them there.

State Rep. Janet Cruz, D-Tampa, returned last week from a one-day trip to survey Ponce. In disbelief from the devastation, she began planning ways to get supplies back.

She started by asking the Tampa Bay Rays if they could help pay for a barge to deliver water, medical supplies and food to residents in rural areas still waiting for aid. Rays senior director of public affairs Rafaela Amador Fink said she wanted to do better than that.

The team has players and staffers with deep community connections to the island. Amador Fink said they started working on finding a plane to charter for what would become a humanitarian relief mission.

Cruz called a contact she made during her Oct. 2 visit. Alex Ruiz, chief strategic officer at Ponce Health Sciences University, was already coordinating relief flights through the Ponce airport. If the Rays could charter a jet, Cruz and Ruiz would work out the logistics.

Wheels went up on the Boeing 737 around 9 a.m. Wednesday from Signature Flight Support at Tampa International Airport. Stowed in the belly were 11 generators and more than 22,000 pounds of medical supplies, water and other rations from Tampa-based Course of Action Foundation. Also on board were four, mushroom-shaped CryoShipper vapor containers, en route to Matta’s lab.

As of Wednesday, 21 days after Maria’s landfall, nearly 90 percent of the U.S. territory was still without power. Entire villages are still inaccessible. Neighborhoods are without running water.

Aid being delivered to ports in large cities like San Juan in northern Puerto Rico is not filtering to central and southern cities, such as Ponce, locals here say.

“There’s cargo stacked in San Juan with no way to get it here,” said George Shipley, vice president of marketing for Ponce Health Sciences University. “For lots of people on the island, people hear on the radio that FEMA is here, but they still haven’t seen it themselves.”

At the Ponce University outpatient medical clinic, running on limited power from generators, a line of a dozen patients waited outside for medicine and psychiatric treatment, some coming because prescriptions have run out and they have no other way to fill them.

Daisy La Boy, 51, unable to work because of a heart condition, had been without her high blood pressure pills since Maria hit.

“I’m very worried,” La Boy said. “This has been a nightmare.”

Karen Torres Echevarria, 46, said she had been missing days at her job with the Department of Education to care for her mother, Marta Echevarria, who has complications from bipolar disorder. She waited in the clinic lobby in tears, having been told by her boss not to come back to work after taking the day to fill Marta’s prescription, she said.

While crews unloaded the supplies from the Rays jet, to be dispersed at various hospitals and neighborhoods, Ponce Mayor María Meléndez Altieri took Cruz and St. Petersburg Mayor Rick Kriseman to a local shelter.

Cruz said conditions were better than she saw a week ago. Lines for gas were 45 minutes instead of 12 hours.

But desperation is still rampant.

“These folks need help,” Kriseman said. “If somebody tells you supplies are getting there, they’re not.”

While touring the school building-turned shelter, Cruz met a woman who had been wearing the same T-shirt since the day Maria hit. Three entire weeks.

The woman looked down at her dirty feet, exposed from wearing flip-flops every day.

Cruz knelt down and started untying her own blue Nikes. She slipped off her socks. She insisted the woman trade shoes with her. Once they swapped, they had a tearful embrace.

In rural hospitals and neighborhoods, diabetics are going without insulin, baby formula is running low and pharmacies are nearly empty. Two doctors from the University of South Florida spent the past week surveying the rural areas and creating a list of critical items needed immediately.

“Patients are in hospitals with no supplies,” said USF internal medicine assistant professor Asa Oxner. “Aid groups are coming in but are focusing on big urban centers first because that’s where the big population is but that’s leaving out rural areas.”

USF director of safety and preparedness Donald Mullins flew on the Rays jet with 1,500 pounds of insulin, IV supplies, baby formula and other needs to be distributed until they can make a return trip with more.

Oxner and her colleague, USF internal medicine assistant professor Elimarys Perez-Colon, returned with Mullins on Wednesday to regroup and plan the next relief mission. There were more new faces joining them for the return flight.

A Moffitt doctor and two nurses traveled to Ponce to retrieve two Puerto Rican cancer patients and bring them to Tampa for treatment.

“Puerto Rico was desolation, desperation, no hygiene, no water,” said Esteban Ocasio. He accompanied his 80-year-old mother, whose chemotherapy treatment was stopped by the hurricane, to Tampa.

The plane was in the air for the return flight less than three hours after it arrived.

A handful of relatives of Rays staff also caught a flight back to Florida. Rays director of scouting Carlos Rodriguez retrieved his grandmother, who was without running water since the storm hit, taking baths with a bucket and using rainwater to flush the toilet.

Rays pitcher Xavier Cedeno took the jet to Ponce with his wife, sister-in-law and English bulldog, but stayed on the island to help recovery efforts for the next three months in his hometown of Guayanilla.

Before the plane departed for Tampa, Cruz called out to check on one last thing.

“Are the mushrooms safe?” she said, referring to the tissue containers. “That’s all I want to know.”

They were stowed in the plane’s belly and greeted at the Tampa airport by Matta’s research colleagues.