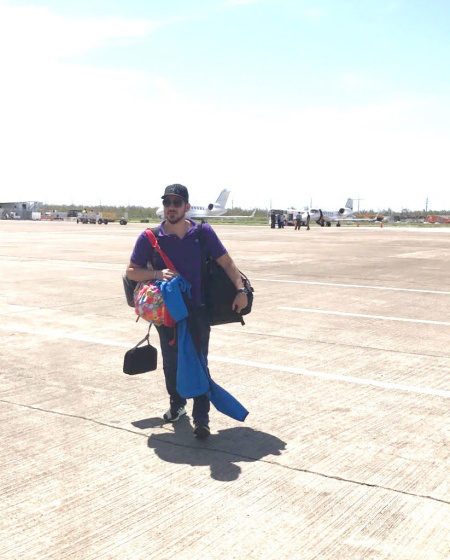 …Filled with Generators, Politicians (and Even Chocolate Milk) to Puerto Rico: ‘I Want to Get the Word Out’

One man who lives in Puerto Rico is proving the power of networking can go a long way when it comes to helping those in need.

Alex Ruiz was making his way home to Ponce, Puerto Rico, on Sept. 19 when his flight out of Panama was canceled due to Hurricane Maria.

The 34-year-old, who was born in Bronx, New York, to hard-working Puerto Rican parents, is the Chief Strategy Officer of Ponce Health Sciences University. He had been traveling throughout South America for work and was eager to get back to his friends, employees and his younger brother, Emil Ruiz, 31, before the storm made landfall.

“I knew I was going to be stranded, but I didn’t know for how long,” Ruiz tells PEOPLE. “Then the next day, Maria hit and that was the last time I had contact with my brother and over 600 of our employees and 1,000 students.”

Ruiz, who moved to Ponce in May 2015 to work for the private, for-profit university, says he felt helpless in his hotel room in Panama as he watched the horror of the storm unfold on TV.

“The first thing I did was just cry. I was watching the news and I couldn’t get in touch with my brother. My mom in New York was asking what was happening — we have a close-knit family,” he says. “I couldn’t watch the news anymore, it was the most depressing thing I had ever seen.”

So he turned that feeling of helplessness into action, immediately calling on as many contacts and connections as he could.

“I believe your network is extremely influential, so I started making calls and getting assistance from friends,” he says. “First, I started calling wealthy friends I knew asking if I could get a private jet.”

When those logistics didn’t pan out, he started networking and eventually got through to San Juan, reaching someone at the Governor’s Office who was leading donations. Then he got a call from Warren Ross, president of the University of Medicine and Health Sciences, St. Kitts, who told him he could get a plane filled with doctors out of Chicago if Ruiz could help get it into Ponce.

Ruiz immediately replied: “Of course, give me 48 hours!”

From there, he got on the phone with Cathy Peng from Johns Hopkins University, who was able to check the status of a nearby airport in Ponce, where she is based.

“I told her I had a plane with four doctors on it, and she found out that we could land it at Mercedita Airport in Ponce,” Ruiz says.

The first plane landed last week and the doctors set out into the community to provide necessary aid.

“The close-knit community of Ponce became the catalyst for all these things getting into motion,” Ruiz says of the community effort he has experienced in the aftermath of the storm.

When Ruiz was finally able to get in touch with his university via a landline, he got to hear his brother’s voice for the first time in eight days.

“I knew he was going to be okay, but it was so good to hear his voice,” Ruiz says.

Then he got in contact with the Hispanic Federation in New York, who worked with the Florida DNC to organize two planes to fly out of Fort Lauderdale on Tuesday. A group of eight Florida Democratic state lawmakers wanted to see firsthand what the island was going through and deliver aid, and Ruiz said he could make a flight into Ponce happen — only this time he asked if he could have a seat on the plane, too.

“I went to Walmart and tried to pack a lot of provisions for my brother and for a very special 4-year-old named Camila on the island. Kenira Thompson, the president of Ponce Research Institute, has a young daughter and she asked me to bring her chocolate milk. So I brought her chocolate milk and animal cookies in a floral backpack!” Ruiz says.

When the plane landed, they were greeted by Ponce Mayor Mayita Meléndez.

“The mayor comes out and starts running towards us and says, ‘Thank you for everything. We need all the help we can get because I have nothing.’ ”

“The politicians were then able to go to more remote areas and see the devastation,” Ruiz adds. “They saw a lot of hurt on the island and have since moved into action.”

As for Ruiz, he went straight to the university, where he saw the damage that had been done to the school, including a brand new $1.3 million neuroscience lab that had been destroyed in the storm.

“I knew that things were going to be difficult, but I was heartbroken,” Ruiz says.

Ruiz decided he could have more of an impact organizing efforts out of Florida, so he is now stationed in Miami, where he is working on getting other planes with aid and resources into Ponce.

And the planes are not only bringing resources in, they are taking people in need out. Five Puerto Ricans with health problems, including a man who had just had triple bypass surgery and another heart patient, all traveled back to Fort Lauderdale with Ruiz on Tuesday.

“I know I can be more effective stateside,” Ruiz says. “But I want to get back there as soon as possible. I’m just here to help an island I love that has been very good to me.”

He adds: “I want to get the word out there because Puerto Rico is in trouble.”

Bronx-Born Man Helps Organize Planes Filled with Generators, Politicians (and Even Chocolate Milk) to Puerto Rico: ‘I Want to Get the Word Out’